A spirited comeback from West Ham but nothing to show for it. 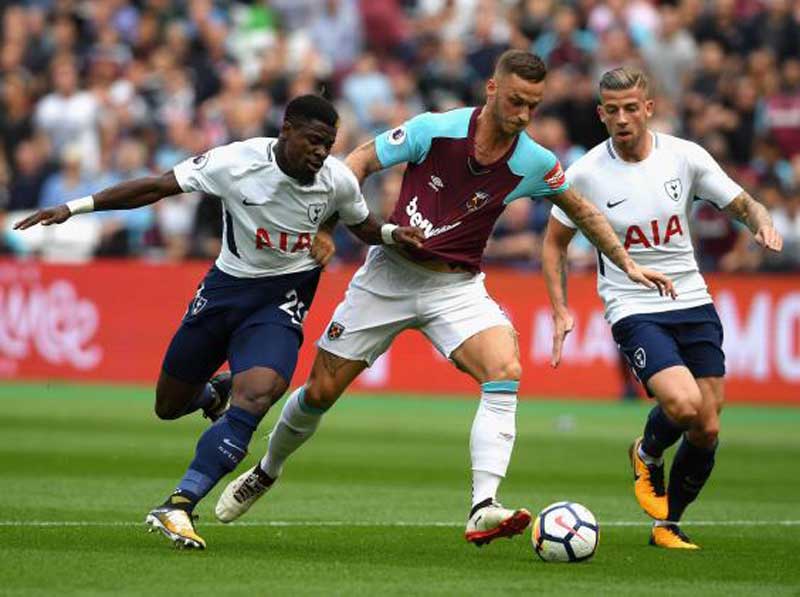 Saturday’s result means that we move back into the bottom three in the Premier League. Six games played, four points. Four games away from home have yielded just a single point, and a win plus a defeat at home give us another three. To get back on to an average of a point a game we must win at home to Swansea next Saturday. The pressure is once again back on the manager, and this will increase still further if we don’t collect all three points in that game.

The Tottenham game was a strange one in many ways. I was there to watch it live as usual, and then saw re-runs of the game on TV later and the usual analysis on Match of the Day. I guess that each time you watch you pick up something new.

For much of the game we matched Tottenham for effort, but were lacking when it came to skill, and a tactical plan. Of course it didn’t help that Antonio picked up another muscle injury before half an hour had elapsed, and I was as surprised as those around me that Carroll was the manager’s choice to replace him. Once again Chicarito was moved to a wider position which, although he possesses a lot of skill it is not his forte. So much of football depends on the officials and their interpretation of events, but I could see quite clearly from a distance of 100 yards away that Arnautavic was having his shirt tugged when put through by Noble fairly early in the game. To my mind it was a clear penalty, (and even possibly a sending-off offence?) and if it had been converted, a 1-0 lead would have put a totally different complexion on the game.

But referee Oliver thought otherwise. He could see that the tackle was clean enough but apparently couldn’t see the shirt pulling. In many ways Oliver is a fine referee, although many social media views from West Ham fans suggested otherwise. They say that if you are good enough you are old enough, but I’m not entirely convinced that this applies to football match officials, particularly at the highest level. He wasn’t any older than some players on the pitch, and I’m not sure that he seems to have the authority necessary to handle a game.

Poor defending let us down, and I hope that when they look back at the game, then Carroll, Kouyate, Cresswell, Reid, and Fonte, will all feel that in different ways they could have done better for the first Tottenham goal. Similarly Carroll and Ogbonna for the second. And everyone back for the free-kick when Kane hit the post seemed transfixed when Eriksen stroked home the third.

But that wasn’t the end of the game, and our heads didn’t go down. A spirited comeback picked out a particular weakness of Tottenham for the ball in the air, and the headed goals from Chicarito and Kouyate led to an exciting climax. I felt that Carroll was moving at speed to head in the equaliser at the end when he was pushed just enough to put him off, in a similar way to Zabaleta conceding the injury-time penalty at Southampton that cost us a point. But once again referee Oliver thought otherwise, and our late pressure petered out with some handbags in the middle of the field that wasted endless time that stifled our momentum.

For me, Zabaleta was our best defender, but nobody else really stood out in the team apart from the short cameo from Masuaku in the latter stages, who showed good ability and looked dangerous going forward wide on the left. Cresswell can cross a decent ball at times, but doesn’t have Masuaku’s ability or pace to go past players. But neither are the best left-sided players around from a defensive point of view.

If you watch the game again you can measure how much time elapsed for each of the three goals scored in the second half and when the game was restarted. Add that to all the second half substitutions, the time taken for players to leave the field, and the Tottenham timewasting in the last twenty minutes and then try to reconcile that with the paltry four minutes that were added. The first half also had two goals, one substitution and Antonio’s injury, yet a mere two minutes was added. The sooner the authorities change the timing system in games, so that the clock is stopped every time the ball goes out of play or the game is halted, and then only re-started when the game resumes, the better. As spectators we are getting short-changed, and teams with a narrow lead are getting away with blatant timewasting.

We could possibly have got a point out of the game, but our shortcomings and contentious decisions not going our way let us down once again. Tottenham showed in many respects why they will probably end up in the top four or five in the league once again, although I cannot see them challenging the two Manchester clubs or Chelsea for a tilt at the top three. I believe that our lowly position is a false one, and that we have the quality of players to be a side challenging for a position in the top half of the table, but no better than that. But I’m not sure that we have a manager with the ability to motivate, and tactical awareness necessary, to go any further than that.

I’d love to see him prove me wrong, but unless we pick up three points against Swansea, then with the second international break following that game, I wonder if the board will lose patience and will give him the opportunity to do so.