Will Swansea be the swansong for our beleaguered manager? Plus a few thoughts on the continuing effect of the London Stadium hosting the World Athletics Championships in August. 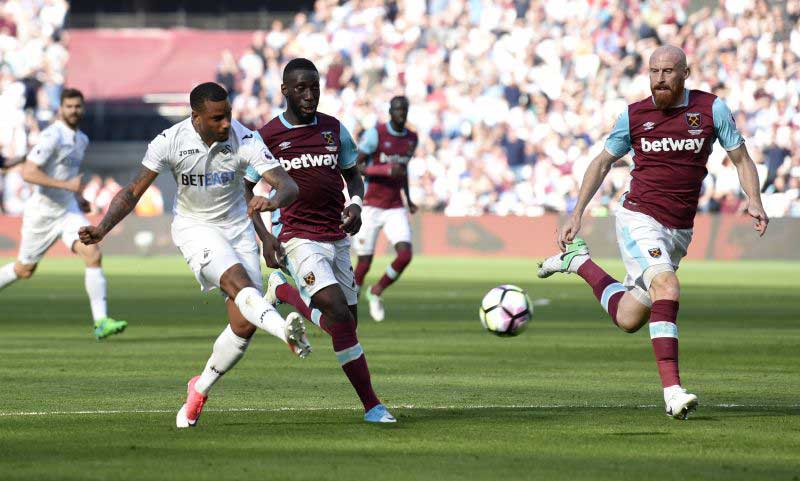 It’s a weird feeling isn’t it? A home league game that kicks off at 3pm on a Saturday. The first one of the season, so make the most of it if you are a fan of the traditional kick-off time, as it won’t be happening again until at least 9 December. The second international break of the season is upon us, and begins after the Swansea game. I wonder if it will be a swansong for our beleaguered manager who seems to be under more pressure than ever if media reports are to be believed.

I wondered about the derivation of the word swansong. Legend has it that swans are mute throughout their lives, but they sing beautifully and mournfully before they die. Let us hope that the team performs beautifully for the manager on Saturday, and that we pick up the much needed three points that would take us out of the relegation zone.

We only have one home game in the month of October (Friday 20 October 8pm v Brighton), and by the end of the month 10 league games will have been played (four at home and six away). November is a more balanced month with two home games (Saturday 4 November v Liverpool 5.30pm kick-off, and Leicester (Friday 24 November 8pm), and two away. Of course the third international break takes place in that month to continue the stop-start to the Premier League season that we endure every year now.

Seven games are scheduled for December, with just three at home and four away. The next potential Saturday 3pm kick doesn’t happen until the 9th when Chelsea are our visitors, but once the Sky / BT schedules are announced that may of course change. By the time we sit down for our Christmas lunch we will be exactly half way into the season, having played 19 games, 9 at home and 10 away, but visits to Bournemouth on Boxing Day, and the return fixture at Tottenham four days later, mean that we will once again be in the position we were in just three games into the season, that is having played three more games away from home than at the London Stadium!

We are forever behind, and the effect of the World Athletics Championships being held at our stadium will be a significant one if we are still lingering in the lower reaches of the table by then. The home / away balance doesn’t even itself out until the end of March, at which time we will have played 16 games at home and the same number away, with just six games left in the season at that time.

If you look back on the history of Swansea visits to West Ham, we have an overwhelming superiority. But I’m not sure that statistics such as these are a good thing! In almost 30 home games against them we have only lost on two occasions. The first of these was in 1956 when we were both in the second tier, but that was too long ago for even me to remember.

The second I can recall very clearly though. It was of course the penultimate game at Upton Park and the last to be played on a Saturday. We went with high expectations as a record-breaking season was coming towards a close and were thrashed 4-1, with a certain Andre Ayew scoring one of the Swansea goals. Of course this massive disappointment was soon forgotten in the following week when we met Manchester United in that never-to-be-forgotten final game at the old ground.

Last season we beat them in April with that terrific strike along the ground from Kouyate from outside the box which was the only goal of the game. That left Swansea in big trouble in the bottom three with just half a dozen games of the season to go, but they escaped the drop with a fine finishing run.

This season, their seventh consecutive one in the top flight, they (like ourselves) have not started as well as they would have hoped. They have lost all of their three home games at the Liberty Stadium, 4-0 to Manchester United, 1-0 to Newcastle, and 2-1 to Watford. But we need to be wary, as their form on the road has been excellent. A goalless draw at Southampton to begin the season, a 2-0 win at Palace, and then another goalless game at Tottenham has given them five points, all away from home. This puts them in 15th place, just one point above ourselves. It is a bit early I know, but we could perhaps call this a “six-pointer” this weekend, as well as an extremely important (must win?) game for our manager.

I rarely manage to accurately predict our starting line-up, as the manager always seems to throw in a surprise or two that I wasn’t expecting. But this time I am confident that he will start with the following eleven:

If the manager subscribes to the “horses for courses” theory then he will be tempted to include Carroll in view of his fine goalscoring record against today’s opponents. Apparently Lanzini is now fit, but I expect him to start on the bench, although I would personally include him from the start in place of Ayew. But I reckon Ayew will get the nod, particularly as the game is against his former employers. Depending on how the game is going I would expect important contributions as substitutes from Lanzini, Carroll, Masuaku, or Rice. I don’t think anyone else will get a look in.

The bookies make us favourites to win the game and we are slightly odds-on to do so. Swansea are around 3/1 plus, and the draw is around 5/2. Given Swansea’s away form, especially the fact that they have yet to concede a goal on their travels, the game is likely to be a tight one. Despite the tension surrounding the manager I hope that we can win a close game, possibly by the odd goal, just as we did about six months ago. A repeat of that scoreline, with the same goalscorer, is on offer at around 33/1.

2 thoughts on “A preview of West Ham v Swansea”