Who would have thought it? A quarter of the season gone, and a difficult ten games at that with seven of last season’s top nine already played, and there we sit in fifth place. It’s been a strange year, we all know that, and football has not been any different, with away teams more successful than ever before. Manchester City are in the bottom half of the table, albeit with a league table so tight that a win with their game in hand would take them into a Champions League place, and Arsenal are 14th, but they are only five points off a top four position themselves. Yes, just six points separate Chelsea in third with Palace who are 15th, and even Tottenham and Liverpool are only two points better off at the very top.

Nevertheless we’ll take fifth for now, and a win this Saturday (early evening) against this week’s opponents Manchester United, would elevate us, albeit briefly into third. To add to the strangeness of this campaign, have we ever gone into the eleventh game of a season having not yet kicked off a league game at 3pm on a Saturday? United themselves are ninth, but if they win the game then they too would rise into the top four, such is the congestion in the league table so far.

We didn’t play particularly well against Villa the other night, yet for the third game in a row we came away with the three points. David Moyes acknowledged that we could play a lot better but he was happy to take the win. I have often written in the past how often we start each half of a game slowly, but this match was certainly an exception. We caught Villa cold with the opening goal within three minutes, and began the second half with a much quicker goal than that. Once again Benrahma provided the assist, and I can see him beginning to play a much more prominent role in the team in the coming games. I read that some people are worried about his ability defensively in a team that Moyes has moulded to defend energetically from the front. Anybody who saw him play for Brentford last season would not be worried on that score. His work rate is excellent and shouldn’t be so easily dismissed because of his attacking qualities.

The main talking points from the Villa game on social media focussed on our relatively poor performance (we can definitely play better), the number of “fouls” we committed as a result of inept officials being tricked by Grealish diving (he is a superb player but he lets himself down by cheating), VAR coming to our rescue (for a change), and Carragher’s post match analysis. As far as the late drama was concerned I would disagree with Carragher’s view. Surely Watkins was already offside when Ogbonna “fouled” him, so the offside, albeit by a fraction of a toenail as drawn by the VAR lines, came first. Anyway, Villa had already been awarded a previous penalty (controversially in my opinion) for a slight tug on a shirt which resulted in a player throwing himself theatrically to the ground. I loved a picture I saw on Instagram where Ogbonna has his arms around Watkins (in true Italian style) and was supposedly saying “I was just trying to keep him onside!” 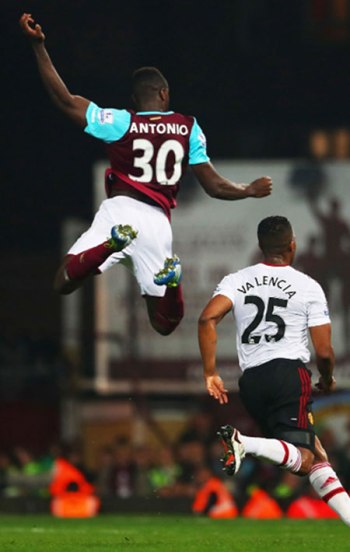 Last week I wrote about Equivalent Fixture Analysis, and the win over Villa takes us 13 points ahead of the same games last season (17 this, 4 last). Of course in last season’s fixture against Manchester United at the London Stadium we collected three points in a 2-0 victory, so we need to win again to maintain the 13 points differential. United were playing (and losing) in the Champions League on Wednesday night so let us hope that will have some influence on their energy levels. A lot is written about players having to play too often these days, but I don’t really subscribe to that. Yes the game is faster than it was years ago, but with squad sizes and improved fitness regimes they should cope OK. I suspect that its often a case of managers and coaches getting their excuses in early.

2000 of our fans will be in the London Stadium for the game. I wasn’t successful in the ballot to get a seat. Perhaps next time? It will be interesting to see how much noise they can generate. I wonder if the artificial crowd noise on TV will be turned off or used to supplement the 2000 for the TV viewers?

I’ve no idea if the manager will change the starting line-up or formation this week. Whatever he decides there won’t be many changes because that’s not his style, and three wins in a row tells its own story despite his reservations that we can play a lot better. I’m sure that is right as we haven’t quite reached the levels of performance that we saw against Wolves and Leicester early on. But West Ham in fifth place despite not playing as well as we could? I’ll take that.

The visit of Manchester United is not the daunting one that I remember from my youth. But despite the league positions and the recent history of this fixture, the United reputation makes them strong favourites with the bookmakers. For some reason unknown to me, they are 11/10 favourites to win the game, whereas we are priced at a very appealing 13/5. I’m confident that we’ll do well and win our fourth game in a row by the odd goal. What are the chances?