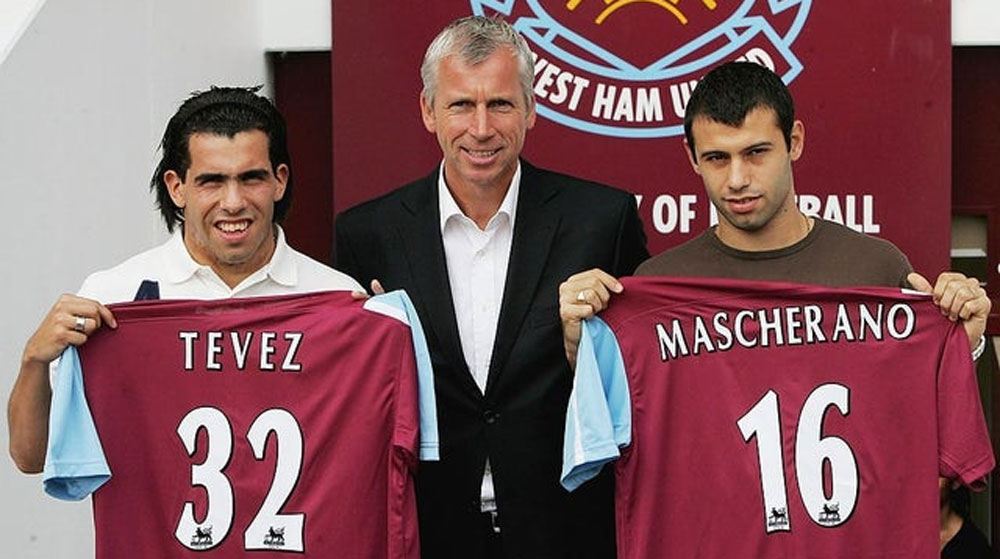 West Ham began the Premier League season 2006-07 with high hopes. We had unluckily lost the 2006 FA Cup final to Liverpool on penalties after conceding a goal in time added on to the infamous Steven Gerrard strike, and then on transfer deadline day it was announced that we had signed Carlos Tevez and Javier Mascherano, two highly sought after Argentinians who had starred in that summer’s World Cup. What could go wrong? This was West Ham remember.

In the opening week of the season we comfortably despatched of Charlton 3-1, and then drew 1-1 at Watford. A 2-1 reverse at Liverpool was followed by a 1-1 draw at Villa. Five points from four games and we were in the top half of the table. Bobby Zamora had scored in all four of those games (a total of five goals) and at the time few predicted what was about to happen. I doubt that Bobby Zamora himself would have believed that he wouldn’t find the net again until mid-January despite playing in almost all of the games.

A home defeat to Palermo of Italy in the UEFA Cup was just the first of eight consecutive defeats which included a run of seven games where we failed to register a single goal. When we did eventually score we had been dumped out of the UEFA Cup at the first hurdle, we’d gone out of the Football League Cup to lowly Chesterfield (2-1), and tumbled down the league to 19th place.

Two consecutive wins against Blackburn (2-1) and Arsenal (1-0 on Bonfire Night), the latter sparking a touchline spat between Pardew and Wenger when Marlon Harewood’s late strike won the game, seemed to have halted the slide, but these were followed by two 1-0 defeats at Middlesbrough and Chelsea. We were still above the relegation places at this time when we faced Sheffield United at Upton Park on November 25th. A first half Hayden Mullins goal was the only score of the match, and at this point we were 15th in the table with Sheffield United 18th.

However three consecutive defeats in the first nine days of December followed (all to nil), and the last one of those (a 4-0 loss at Bolton) resulted in the sacking of manager Pardew just two days later. Two days after that Alan Curbishley was appointed and in his first game in charge we beat Manchester United 1-0 with a goal from Nigel Reo-Coker. But just three points from three draws in the next eleven league games, the last of which was an unlucky 4-3 home defeat to Tottenham, meant that with just nine games of the season left we were effectively 11 points adrift of safety with virtually no hope of escape. The Tottenham game was Tevez’s 20th appearance and brought his first goal!

The rest is history as we won seven of our final nine games, including the last-day 1-0 win at Manchester United which ensured safety (although a draw would have been enough). The two defeats in that winning sequence included a 3-0 reverse at Sheffield United, and a 4-1 loss at Chelsea. Incredibly we then won the final four games. Sheffield United lost at home to Wigan on the final day when a draw would have been OK and this sent them down.

The Blades insisted they were victims of a relegation rival gaining an unfair advantage by breaching the rules that barred third parties such as agents, or a company or investors, from holding a stake in the financial rights to a player. To many of us it seemed ridiculous. Mascherano had barely featured all season, while Tevez only started scoring towards the very end.

West Ham were found guilty in April 2007 of acting improperly and withholding vital documentation, but Tevez was allowed to continue playing and his part in the Hammers’ survival rankled with the Blades. Sheffield United subsequently slid into League One before their recent resurgence, while West Ham, in contrast, have only spent one season since outside the top flight. West Ham eventually paid £20m in compensation, having initially being fined £5.5m rather than being docked points. An arbitration panel said “the club had not only deliberately breached the rules but committed a grave breach of trust and been responsible for dishonesty and deceit”. The teams have only met once since, in a League Cup tie five years ago, which away side Sheffield United won on penalties.

I’m always amazed at some of the statistics that are dragged up these days before Premier League matches but the following are some of what I have read. Firstly we haven’t won a league fixture in the month of October since beating Sunderland in 2016. In that time we have drawn three and lost six matches. Secondly, including cup games, after four clean sheets in a row we have conceded at least two goals in four consecutive games since. And thirdly, since Haller scored with his right foot in the first half of our game against Norwich at the end of August, the next six league goals we have scored have all been left foot strikes.

Did you know that Sheffield United could become the first newly-promoted side for over ten years to remain unbeaten in their first five away games in the Premier League? Also, they have not kept three consecutive clean sheets away from Bramall Lane in the top flight for over 48 years, a record they would equal if they do not concede a goal today. Plus, this is their best performance in the first nine games of a top division season. One statistic that I really hate repeating though is that they have not won once in their last 16 games in the top division in London!

My co-blogger Geoff Hopkins wrote an excellent article published yesterday where he set out his expectations for today’s game. I have to agree with most of what he wrote, and I don’t believe his prediction of a goalless draw will be far away. However I don’t want to travel all the way to the London Stadium to see us come away with just a single point without seeing a goal being scored. For that reason I will dust off my trusty optimistic hat, and predict a 1-0 win with the sequence of left-footed goals being broken by a Sebastien Haller header. What are the chances? Another prediction – we will once again be the last game on Match of the Day!