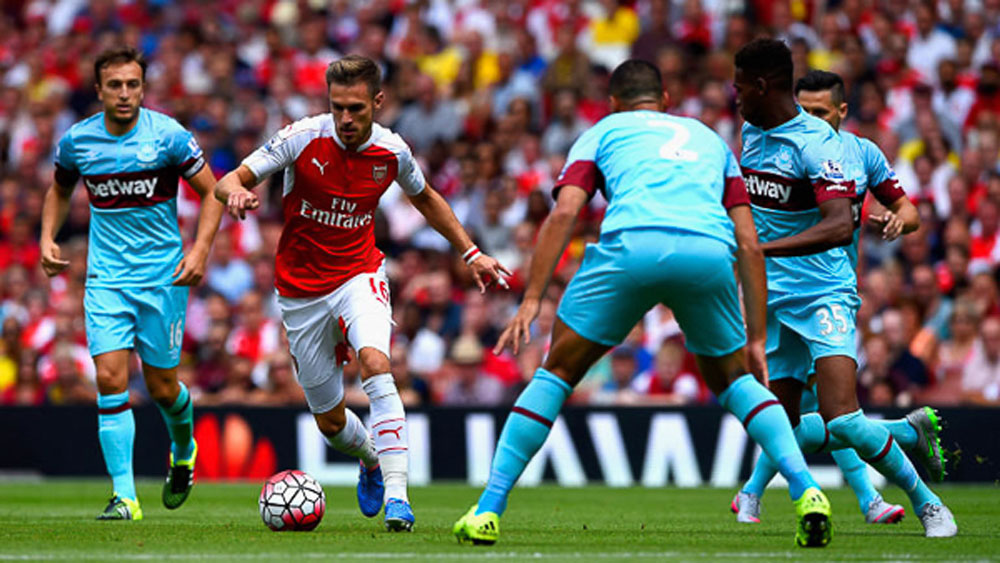 In the middle of June when I first saw the Premier League fixture list for this season, how many points did I think that we would have by the end of August? The optimist in me, balanced against the realist, thought that after our first three games, two tough away fixtures at Liverpool and Arsenal, and an easier (on paper) game at home to Bournemouth, that we would have three points. An average of roughly one point per game for 38 games is what is needed to achieve the first target; that is survival to play in the top flight for a further season, and reap the rich financial rewards for doing so. Of course I hoped for nine points, but even the world’s most optimistic West Ham fan wouldn’t have dreamt of a start like that. We could, of course, still reach three points from three games, but that will require a victory at the Emirates Stadium on Saturday, and realistically how likely is that?

Many will point to the fact that if you look at the league table then getting something out of the game is very possible. After all, although we rose from the bottom into nineteenth place on Sunday, thanks to Manchester City’s (expected) demolition of Huddersfield, Arsenal only sit in seventeenth place themselves, level on zero points but with a goal difference superior to our own. Gunners fans would argue that you could hardly get two much tougher opening fixtures than facing Manchester City and Chelsea, and their realistic supporters probably also expected to have three points after three games when they realised that the Hammers were third game up. History will tell you that we don’t often win away games at Arsenal, although they are not as rare as wins at Anfield. I have witnessed it more than once, the most memorable being the “I was there” 2-0 victory at Highbury in the quarter-final of the FA Cup in 1975, one of the times we went on to lift the trophy at Wembley. But at that time Arsenal weren’t the force that they have been over the last couple of decades or more. Even though we finished in the bottom half of Division One in that “cup-winning” season, Arsenal were three places below us.

My first visit of this season to the London Stadium last weekend was a big disappointment. I fully expected us to beat the Cherries, especially so at half-time when we led 1-0, although the lead was perhaps more than we deserved. As the first half wore on Bournemouth began to realise that their attacks down the flanks behind our full backs were not bearing fruit, and that there might be a simpler way through the gaping hole right in the middle of our defence. The lack of a competent defensive midfielder (such as Pedro Obiang, inexplicably in my view left on the bench), and two centre backs lacking real pace, unused to playing together, too far apart, prone to switching off, and perhaps better suited to facing bigger (in stature) strikers of years gone by, was a godsend to a Bournemouth attack which had both the pace and skill to exploit the situation. It was only poor finishing and the fine reflexes of Fabianski that stopped them being at least level at the break. 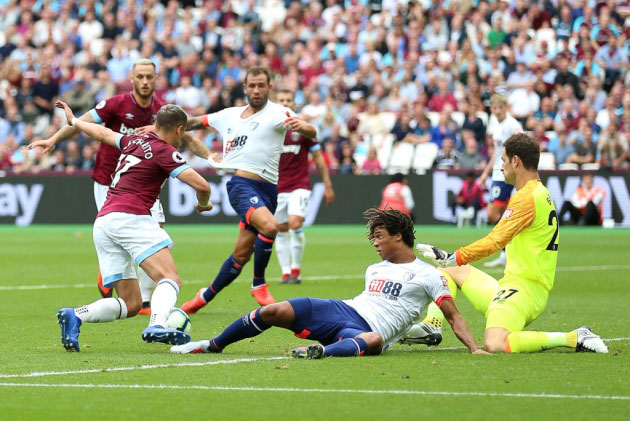 However, I can just picture the Bournemouth dressing room at the interval, and their fine young astute manager, Eddie Howe, pointing out the frailties of the West Ham defence, and how they could benefit from it. And whilst I could admire the Callum Wilson goal where he left five defenders in his wake (even though I had left him out of my fantasy football team that weekend!), I was disappointed to say the least in the abject defending that allowed him to do so. And the second goal was just as bad. Ogbonna, who I am afraid has never been my favourite centre back, was solely to blame in my view, firstly for losing his marker and getting on the wrong side when he should easily have won possession if he had been concentrating properly, secondly for conceding the foul in a dangerous position, thirdly for not watching the ball as the free kick was being taken (being more interested in obstructing the man he was facing), and finally allowing the header which ultimately won the match. The introduction of Rice to play as a central defender, and given the opportunity of a long run in the team, cannot come too soon from my point of view.

I have written more than once in these blog articles about the timing of football matches with regard to time wasting. I have championed (and will continue to do so) the simple method of having a clock in the stadium controlled by a timekeeper behind the scenes, who every time the ball the ball is out of play stops the clock, and starts it again when play resumes. The whole concept of time wasting would be totally eliminated with this simple procedure, plus everyone in the stadium would know exactly how long there was to go. Goal celebrations are a big thing in football these days (it is amusing to look back in time to see how they have changed), and as each of the Bournemouth goals went in I looked at my watch to time how long it would take for the game to be re-started. On each occasion it was almost two minutes. If you add to this the time taken for the second half substitutions to take place (especially the Bournemouth ones), and the lengthy (but understandable if you can get away with it!) time-wasting of the Bournemouth players, the feigning of injuries, and time taken to take goal kicks, then I fail to see how a referee can deem that only four minutes should be added.

But having said that, having just witnessed one of the poorest displays of refereeing that I have seen in years from Mr. Atwell, then perhaps I shouldn’t be surprised. The loss of the match was in no way attributable to his poor performance, but the total lack of respect / confidence in him by the players, the way he kept stopping the game for silly things, his lack of using the advantage rule even once, his inconsistency in approach, in addition to the poor time-keeping, was a reflection of a bad day at the office for this official. I hope not to see him spoil a game of football again. Having witnessed the (generally) excellent refereeing in the World Cup tournament in the summer, it was a shame to see a domestic game handled so poorly.

Few of the West Ham players had impressive games and collectively we just do not look like a team yet. Hopefully it will happen sooner rather than later. A third straight defeat this weekend would leave us playing catch-up in the league, a similar situation to the past two seasons. For me, Fabianski, Wilshere, Snodgrass, Arnie, and Masuaku (when he was attacking only) had OK games, as did the three substitutes, Yarmolenko, Perez and Sanchez who all gave brief glimpses in their cameos of why they should become good acquisitions. I have to say I was expecting to see more from a player that supposedly cost over £40 million, and hope that he will begin to demonstrate this soon. I haven’t got a clue as to the manager’s thinking on team selection for this game, but for me, Rice in central defence, and Obiang in midfield would be my first two names on the teamsheet. For this game perhaps Sanchez could be selected alongside Obiang to provide even more defensive cover, with Wilshere pushed further forward into the so-called number 10 role.

My team selection for this game in a 4-2-3-1 formation would be: Fabianski; Zabaleta, Rice, Balbuena, Cresswell; Obiang, Sanchez; Anderson, Wilshere, Snodgrass: Arnautavic. If we played with three centre backs, Rice, Balbuena and Diop, then I would be more than happy for Fredericks and Masuaku to occupy wing-back roles as opposed to Zabaleta and Cresswell. Yarmolenko may not be 100% yet, but he will certainly be pushing for a starting place along with Perez. For me, Ogbonna, Noble, Antonio and Hernandez would just be squad players with places on the bench at best, but it is all about opinions and some would disagree.

The bookmakers’ odds for the game tell you what they believe will happen. The odds on a 4-0 Arsenal victory (14/1) are shorter than the price of a West Ham 1-0 win (17/1). Aubameyang is priced at only 10/1 to score a hat-trick, only slightly longer than the West Ham odds to win the game (8/1). Jack Wilshere has been quoted in the London papers as saying that it is “a good time to play Arsenal.” If you believe that he will score the first goal of the game, and that West Ham will win 2-0 (as they did on the opening day of the season at Arsenal just three years ago), then you can get a return of £3500 from a £10 stake. A £10 bet on Lucas Perez inflicting the same first goal on his previous employers in a 2-0 win would yield £2100.

Idris Elba (a Gunners fan) is up against Lawrenson this week and predicts a 6-0 victory as opposed to Lawrenson’s more conservative 2-0. “Football expert” Lawrenson trails his guests (not football experts!) after two weeks of the season with his predictions so far, which just goes to show that you don’t need to be a so-called “expert” to have a view on what will happen in football, and that the opinions of fans can be just as valid as those of pundits who have played the game at the highest level. For no logical reason based on past performances away at Arsenal, or our form this season to date, I will however don my optimistic hat once again and forecast a 2-0 victory for West Ham to kick-start our season and get us back on track to my thinking of three points after three games.

Stranger things have happened. Just three seasons ago, in the final season at Upton Park, our opening four games were (on paper) easy home games against Bournemouth and Leicester, and tough away fixtures at Arsenal and Liverpool. I thought then that we would hopefully have six points after the four matches and that is exactly what we had. But not in the way that I thought! We lost the home fixtures to Bournemouth and Leicester, but beat both Arsenal and Liverpool away from home scoring five goals without conceding at all. You never know quite what you are going to get when you follow West Ham, and perhaps that is part of the beauty of supporting them.