West Ham snaffle what looked like being an unlikely draw at Stamford Bridge. As well as earning another valuable point in the quest for Premier League survival what else did we learn? 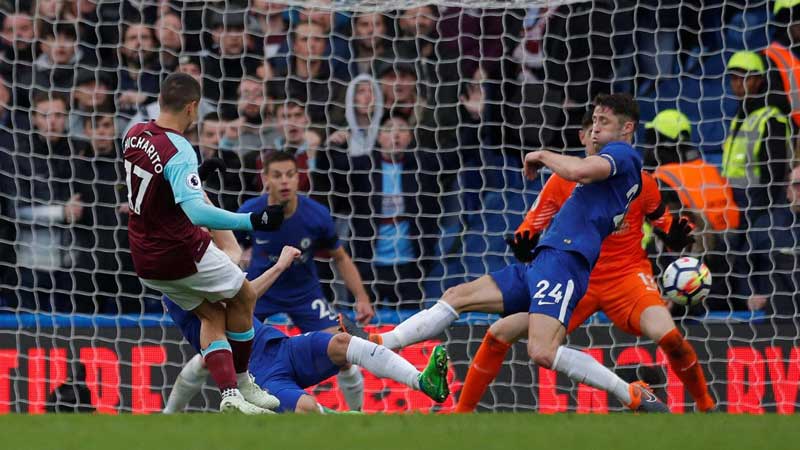 I am not going to lie, this was a very fortunate but hugely valuable bonus point in West Ham’s survival struggle.  For most of the first half, and large parts of the second, the Hammers were second best in all areas.  There is no doubt that Chelsea have some fine players but allowing those players full and free rein to express those talents was a reckless strategy and served again to highlight the fragility of the West Ham squad.  If you are wanting to stop Chelsea play then you don’t allow the likes of Hazard and Willian as much of the ball as they like, and give them all the room in the world to use it.  West Ham have the second poorest defensive record in the Premier League but defending is a team responsibility.  Until there is effective protection from midfield and an ability to retain possession for more than a couple of passes then the defence will always be under pressure.  At the end it was a very welcome point but it owed more to the host’s shortcomings than our own efforts.  On another day Chelsea could easily have been out of sight well before the hour mark.

A Return to Average Performances

Following on from the encouraging win against Southampton the previous week, only a handful of players could be satisfied with their afternoon’s work.  Edmilson Fernandes, Cheikhou Kouyate and Mark Noble were all poor in the roles asked of them in midfield while Joao Mario and Arthur Masuaku did not live up to the promise shown a week before.  On the plus side both Angelo Ogbonna and Declan Rice performed admirably in defence showing a level of concentration and commitment that is not always obvious in our rearguard.  Joe Hart had an excellent afternoon demonstrating an agility that has been largely lacking during his time in London.  My issue with Hart remains that having a loan player (that you have no intention (I assume) of buying) as your Number 1 is a flawed strategy.  Star man once again was Marko Arnautovic who has become more skilful and more of a handful as each week goes by – even if he should have done more to prevent the Chelsea goal.  I hate to think where we would be this season without him.  There really is no need to hold a Hammer of the Year poll.

West Ham were totally on the ropes from the start of the second half and it looked to be only a matter of time before Chelsea extended their lead.  A lifeline was badly need but it took David Moyes a long time to ‘phone his friend’, Javier Hernandez.  It was no surprise that it was Fernandes that was sacrificed, a player with good technique but no position; wherever he was meant to be playing yesterday was not it.  Pundits scratch their heads as to why Hernandez does not get more game time at West Ham but he remains an enigma.  Undoubtedly he is the best goal scorer at the club but how to accommodate him (other than as substitute) remains problematic.  Conceding goals has been more of an issue this season than scoring them and playing two forward players could make matters worse.  Arnautovic has blossomed once freed from tracking back duties and this could be compromised if he is played in a more withdrawn role.  Having said that it was superb combination play between the two to score a finely struck equaliser.

The game certainly livened up once the scores were level.  The closest West Ham went to nicking a winner was when Arnautovic breezed past the Chelsea defence only to be thwarted by Kante as he bore down on goal.  While Kante was lightning fast in getting back (probably no other player could have even got close) it still looked to me as if the he played Arnie’s boot rather than the ball.  Personally I was pointing to the spot straight away but the referee thought otherwise.  This is not the type of decision that you get playing away at a top six side but would have had a high probability of being given if it had happened at the other end.

The weekend turned out to be a good one for West Ham in the battle for survival.  The point earned took our total to 34 from 32 games played.  My best guess is that neither Southampton nor Stoke will get more than 35 points meaning that one more win or a couple of draws should be enough.  Games at this time of the season have the added complication of teams starting to switch off or with their focus elsewhere.  Several of the relegation threatened clubs still have to face Everton who are clearly going through the motions under Fat Sam; Leicester also have nothing to play for.  Southampton made a better fist of things against Arsenal but still came away with nothing from a half empty Emirates, where the hosts are pinning all of their hopes on the Europa League.  West Ham may already have done enough to limp over the line but it is evident that major surgery is required on the squad if this season’s woes are not to be repeated; preferably by someone who knows how to build a team rather than simply buying players offered up by agents without any understanding of how they will complement one another on the pitch.  You can’t complete a jigsaw with odd shaped pieces taken from many different puzzles.