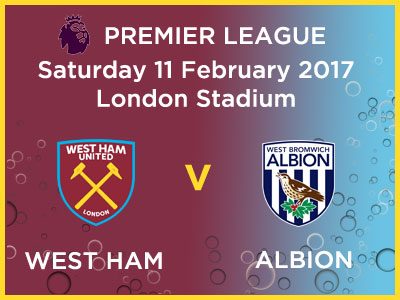 Having stealthily clawed their way to 9th in the Premier League table, with a sequence of effective rather than spectacular performances, West Ham will seek to build on the resurgent air of optimism at the London Stadium by stamping their authority of today’s encounter with West Bromwich Albion.

Albion are now comfortably the biggest team with a Birmingham postcode, and sit one place and five points above the Hammers in the table at start of play.  Realistically nabbing 8th place is about the very best that West Ham can hope for this season and in the circumstances Albion (and their pragmatic manager) may well be inclined to settle for a point this afternoon.  The Baggies look to be this year’s over-achievers with a style of play that has seen them record less possession than their opponents in every single game they have played this season in the Premier League.  Hate him or merely dislike him, Tony Pulis has a knack of making do with a collection of spare parts that will get the job done even if it’s not particularly easy on the eye.

We are a different team now, we have players fit, that is the key. Now we have to at least maintain it, try to avoid injuries, work hard and try to improve.

It is not difficult to predict how the game may shape up today.  Albion will be happy to concede possession, will be respecting the point they started with, looking to frustrate the crowd and perhaps snatching a goal from a breakaway or set piece, if the opportunity arises.  Whether West Ham have the wit and tactical nous to overcome such an approach is the big question to be answered.  An early West Ham goal would put a very different complexion on both the game and the atmosphere inside the stadium.

The overall record against West Brom is running neck and neck with both sides having won 40 of the 104 meetings that have taken place over 104 years.  West Ham have won two and drawn five of the last seven home fixtures against Albion whose last win on our own turf was the 4-3 victory in November 2003; a game in which they recovered from 3-0 down and Jermaine Defoe was sent off.

West Ham have reclaimed their rightful position at the top of the Premier League injury table, reporting a total of 10 injured players.  Of these Angelo Ogbonna is out for the remainder of the season, Diafra Sakho is allegedly back on 1 April (note the date), Arthur Masuaku is two weeks away from full fitness and Gokhan Tore (who by now must resemble the Michelin Man) has no return date.  The remainder (Carroll, Kouyate, Cresswell, Byram, Nordtviet and Arbeloa) are either slight doubts or subject to a late fitness test – whatever the difference between those two statuses is!

The extent of the injuries to Carroll, Kouyate and Cresswell are the most likely to affect the starting lineup and, if all is well, I would expect the same team that started at Southampton with the exception of Lanzini in for Feghouli.

They are a good team, they’ve got some good players.  They’ve had a season of being very, very good and pretty bad at times and we just go there and hope we can compete.

West Brom have no injury worries with both Jonny Evans and Claudio Yacob recovered from injury and/ or sickness.

The Albion lineup has a decidedly workmanlike look about it but it was enough to see us off in the fixture at the Hawthorns earlier in the season.  The Baggies have secured most of their points from bottom ten sides this season while we have performed poorly against those in the top ten.  A neutral might see this as a nailed on draw but I am optimistic for that early goal as a catalyst for a comfortable victory.  My fingers will be firmly crossed that our starting eleven, once announced, will endorse confirm my optimism.  The thinness of options in attack and full-back will continue to torment for the remainder of the campaign.

Man in the Middle

It is an early return to the London Stadium for Michael Oliver from Northumberland who was in charge of the unhappy FA Cup tie against Manchester City just two months ago.  In a total of 26 games this season Oliver has contributed 82 Yellow and 2 Red Cards.