Can we reverse the result at the London Stadium in September? 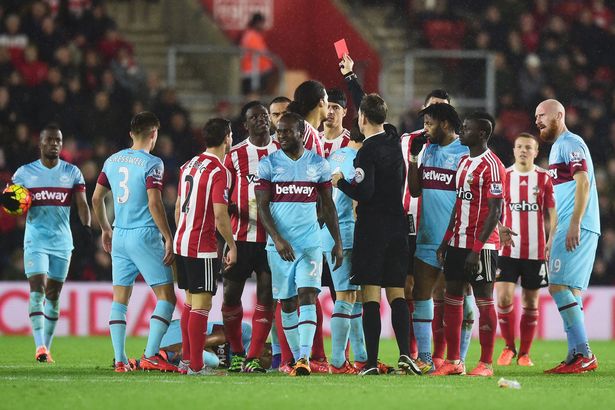 We move on to game twenty-four in our topsy-turvy season. We have a trip to the St Mary’s stadium on the south coast to face a Southampton side whose season has been just as inconsistent as our own. Anybody who saw them beat us convincingly 3-0 in the sixth game of the season, at which point they had a five point lead over us in the table, would be surprised that they now sit one place and one point below us in that congested area which sees Stoke in 9th place on 29 points and Bournemouth in 14th on 26. We are 11th on 28 points, at a midpoint of nine points below Everton who currently sit in our finishing place last season (7th), and nine points above the drop zone.

It is highly unlikely that we can improve enough to move upwards to finish 7th as we did last season, and improbable that we can implode to finish in the drop zone either. So mid-table obscurity is the order of the day, and an exit from cup competitions means that we have little to play for other than pride, and to finish as high as possible to earn financial rewards that are based on finishing positions.

Realistically, based on our performances to date, our final finishing position is very likely to be somewhere between 9th and 14th, so the six clubs in that band, Stoke, Burnley, West Ham, Southampton, Watford and Bournemouth, separated by just three points, are in a mini-league hoping to finish at the top (i.e 9th). These six teams can perhaps be considered to have performed the most inconsistently this season, and all six have lost more games than they have won, without being that bad to be considered relegation candidates.

The prize money for a 9th place finish is £24 million, and drops by £2m for each position, down to £14million for finishing 14th. The difference of £10 million is sufficient to buy you another solid Premier League footballer (such as Robert Snodgrass, for example) who will help you to retain a mid-table position the following season, but not enough to buy any players to take us to the next level.

So the games against the other five teams in my mini-league take on added significance, and we have yet to play all of them for a second time this season, and the first of these games is on Saturday. We have already met all five of them at home, so they are all away games between now and the end of the season.

Our opponents on Saturday have beaten seven teams so far, Swansea, Burnley, Everton, Middlesbrough, Bournemouth and Leicester, in addition to ourselves. By the middle of December they had only lost five times, but a very poor run since then has seen them lose five of their last six league games. Their only win in that time was a 3-0 win over Leicester in their last but one game.

Of the six aforementioned teams in my mini-league, only Burnley and Leicester are still in the FA Cup, although Southampton have performed well in the EFL Cup to reach the final where they will take on Manchester United at the end of February. It is surprising to me as to how many of them fielded weakened teams in the FA Cup competition this season. None of them were in a position to challenge for a European place, and none of them were likely to be involved in the relegation dogfight. Surely they owed it to their fans to try to win the FA Cup? Fans will remember a visit to Wembley to contest the FA Cup final for years to come, but they won’t remember the difference between finishing 9th and 14th in the Premier League. We can exclude ourselves of course. We put out a strong team but were still battered by a rampant Manchester City team in the third round!

So what will happen when we take on one of the other “inconsistent” teams this weekend? To be quite frank I haven’t a clue. Based on current league form since around mid-December, we have performed better in our last eight games than our opponents, winning five of them to their two victories. But for many of those we weren’t that impressive, but nonetheless they were victories. On the other hand Southampton will remember their victory at our place earlier in the season.

We were both promoted to the Premier League in 2012 and have met nine times since then. We have won three times (all at home), they have won three (including two at our place), and three have been drawn (two of them goalless). We last won on their ground in November 2000, more than sixteen years ago, when goals from Kanoute, Stuart Pearce, and Sinclair, helped us to a 3-2 victory.

The smart money (according to the bookmakers) is on a home win, with Southampton odds-on to collect three points. I hope that we can prove them wrong and win there for the first time in a long while, but realistically I predict a 1-1 draw, replicating the score in the game in April 2013, and an important point against one of the other teams in the race to finish 9th! On that day less than four years ago, Andy Carroll scored our goal, and he is the only player in our team from that day who is likely to face the Saints on Saturday. How times change. Other players in the starting line-up that day included Jaaskelainen, Demel, Diame, Nolan, O’Brien, O’Neill, Jarvis, Tomkins and Vaz Te, all long gone. The only other starter on that day who could possibly play is James Collins, but I suspect he will be on the bench.