A player who burst onto the scene, scored against Millwall but then faded away.

West Ham prides itself as the ‘Academy of Football’ in deference to the success it has achieved over the years in bringing through talented young players from the youth system.  Most fans have a special place in their heart for home grown players but so often talented youngsters burst onto the scene only to fail to fulfil their promise.  In this series we look at some of those players who despite high hopes never quite made the grade at their boyhood club.  Today we look at the career of Zavon Hines; the only West Ham player ever to have a first name starting with the letter ‘Z’.

Commentators frequently refer to young players coming off the academy conveyor belt.  In truth if the West Ham academy were a conveyor belt it would be one producing London busses where nothing comes along for ages and then several arrive all at once.  During the closing years of the ‘naughties’ a new crop of young players were given West Ham debuts; a roll call that included Jack Collison, Freddie Sears, James Tomkins, Zavon Hines, Junior Stanislas and Josh Payne.  Internet chatter at the time would likely have been full of bright future forecasts for Upton Park whereas hindsight tells us that only Tomkins and Collison made any real impact at the club. 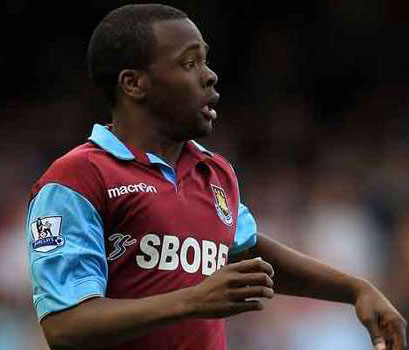 Hines had spent a brief spell out on loan at Coventry City before being given his West Ham debut, as a substitute for Valon Behrami, in a League Cup tie against Macclesfield in August 2008.  Hines was one of three goal scoring substitutes that day in a 4-1 victory.  A knee injury hindered progress during the remainder of the 2008/09 season but despite this he received a call-up from Jamaica for an international friendly in early 2009 although ultimately he did not play.  Hines later went on to represent England at U21 level, scoring two goals in two appearances.

At the start of the 2009/10 season Zavon was very much part of new manager Gianfranco Zola’s first team squad: scoring one of the goals, in extra time, during the infamous 3-1 League Cup against Millwall; giving Jamie Carragher the run around in a match against Liverpool; and then netting an injury time winner in a Premier League game against Aston Villa to haul the Hammers out of the bottom three.  That was to be his last goal for the West Ham as first injury struck again in January 2010 and then the team’s struggles in 2010/11 brought his West Ham career to an end.  In the summer of 2011 he declined the offer of a new contract and instead signed a deal with Burnley.  In a total of 31 appearances he had made 12 starts, scored 3 goals but only played a full 90 minutes on five occasions; each of these ending in defeat.

Hines has become something of an itinerant footballer since he left West Ham.  He failed to impress manager Eddie Howe at Burnley and made his way via Bournemouth (on loan) to Bradford City, Dagenham & Redbridge and now Southend United, where he signed a short term deal in January 2017 until the end of the season.  The probable highlight of his career was Bradford’s League Cup run in 2012/13 where he featured in both legs of the surprise semi-final win against Aston Villa and then in the final (as a second half substitute) with Swansea, which Bradford lost 5-0.  In the build-up to the final there were several newspaper features on Hines and how he had tried sports psychologists to rescue his failing career but whether it was injuries, aptitude or attitude he has never really become the player we might have expected.

In a career that has spanned 10 seasons he has appeared in just 140 games scoring 15 times.