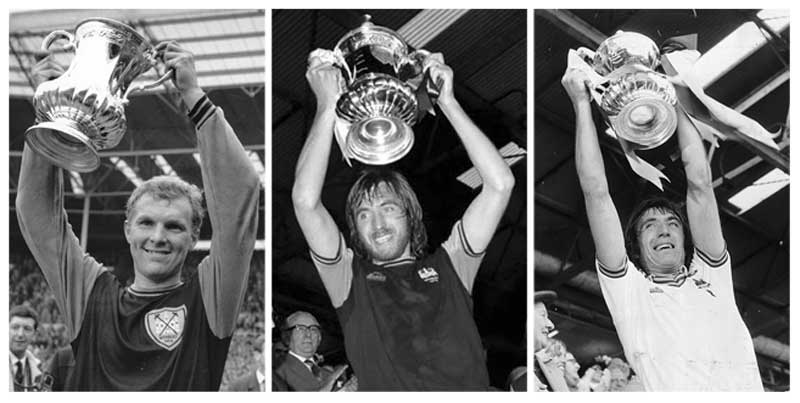 Are you old enough to remember Saturday May 10 1980? I remember it as if it was yesterday, not almost 38 years ago! Working as an assistant manager for a Building Society at the time, and with a less than understanding manager, I had to work on that Saturday morning in Wanstead. We closed the doors at 12.00 midday and then we had to cash up before we could leave. The tills were balanced in record time and by ten past twelve I had crossed the road to Wanstead station on the central line, and was heading off to meet fellow co-blogger Geoff at Baker Street for our visit to the twin towers of Wembley.

We were in Division Two at the time and not even close enough to be pushing for promotion. Arsenal were of course where they have always been in the top tier. We didn’t have a chance did we? But at the age of 26 I experienced West Ham’s third win of the FA Cup, a trophy that meant so much at the time, unlike in the modern era, where it is totally overshadowed for financial reasons with the need for teams to concentrate on the Premier League. It is a shame, but unfortunately a fact of life that things move on.

I was ten years old when we first won the FA Cup, beating second division Preston 3-2 in 1964. This of course led to winning a European trophy the following season when we triumphed in the European Cup Winners Cup Final again at Wembley, before the hat-trick of the World Cup at Wembley a year later.

I had to wait until I was 21 before our second FA Cup win, an unremarkable game in 1975 where we beat second division Fulham (with our very own Bobby Moore in their side). So by 1980, when we won for the third time, for West Ham to win the FA Cup it was something I could expect to experience every few years.

But of course life isn’t like that, and here I am in 2018 waiting for it to happen again. Of course we came mightily close in 2006 when we should have beaten Liverpool, and perhaps if the game had been played at Wembley rather than Cardiff then we might have done so. In my lifetime we are unbeaten at Wembley in what I would call important games like FA Cup finals, League Cup finals, Play-Off finals, league games, and league cup ties. I will conveniently ignore the Charity Shield games against Derby (1975) and Liverpool (1980) which act as a curtain raiser to each new season. That unbeaten record was continued on Thursday evening with the magnificent rearguard action in the 1-1 draw against a Tottenham team who everybody expected to beat us comfortably.

Before I finish I’ll go back to 1980. Just two weeks before the FA Cup Final, Geoff and I took our seats at Upton Park in B Block in the old West Stand with less than 20,000 others to watch a league game, which was against Shrewsbury. It was the first time I’d ever seen us play against these opponents as we had never before been in the same division. In the first meeting that season just before Christmas they had given us a 3-0 drubbing at the wonderfully named Gay Meadow Stadium, and they did the same at Upton Park, although this time we did at least have a Trevor Brooking goal as consolation to the three we conceded.

We did the double over them in our record breaking promotion season the next year and we have never played them since. Of course the FA Cup doesn’t have the romance or glamour that it had in my youth, but I would still like us to win it again one day. This season we are battling with a dozen other teams to avoid relegation, and our injuries are mounting up too, so our team today is likely to include a number of our promising youngsters who are rarely given a chance in league games. It wouldn’t be as big a shock as it was in yesteryear if we were to be eliminated from the competition by a third tier side, but as West Ham fans we have experienced it enough times in the cup competitions, and I hope it doesn’t happen today.

Perhaps we can beat Shrewsbury comfortably, then go on a winning run in the league to remove all fears of relegation, and then field a strong side in the latter rounds of the FA Cup before going on to win the trophy next May. We are entitled to dream aren’t we?